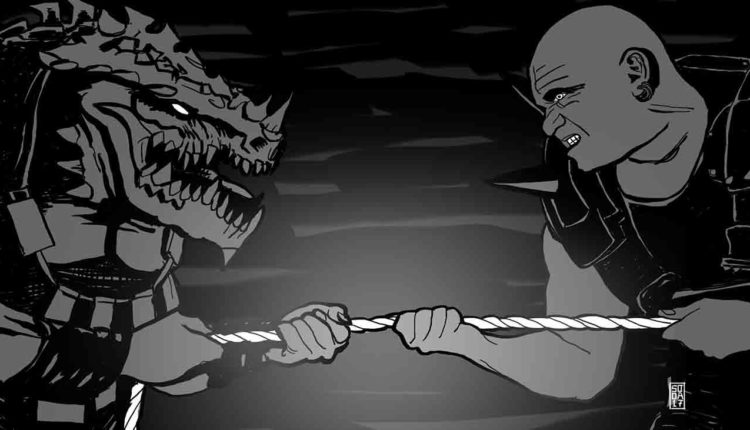 For many coaches, a part of what makes Blood Bowl so fun is that it is possibly the most unfair strategy game ever created. This unfairness at heart was introduced in Blood Bowl’s very first edition which had a very light tone, a fun snub to all those gamers who took themselves too seriously. Fortunately, after all the revisions to its game rules, Blood Bowl’s heart is still full of injustices.

By how much is this game unfair? Let’s look at the graphs below!

The rules for Blood Bowl Second Season are young and it is still too early to jump to conclusions – especially since Games Workshop has made significant changes to the balance of the game in its latest FAQ.

In the table below, the NAF column details the percentage of each race at NAF-sanctioned tournaments. The statistics in this column contain more games played with Star Players than the other columns.

The next three columns show a race’s win percentage at an average team value tier raking the top and bottom 200K. These statistics are all from Fumbbl, the only online league using BB 2020 rules. Not surprisingly, stats are still scarce, especially for the few less popular races, and we’ll have to wait for thousands more games to be played before seeing the win percentages stabilize.

Using a sound methodology (mind you, it is certainly not irrefutable), we analyzed statistics detailing tens of thousands of games played online and at NAF tournaments. We strongly suggest you not to use these results to jump to absolute conclusions. However, I am sure you will have no difficulty noticing some serious trends.

NAF is a team’s victory % in tournament formula.

The next three columns show each team’s victory % at an average team value raking the top and bottom 250K. To simplify the picture, this % is an equal parts mix of matchmaking and open league (don’t shout to heresy because you would be surprised to see how similar the results are from an environment to the other).

The Taureau Amiral Rating (TAR) is the overall performance of each team on a scale of 0 to 5. The objective of this statistical calculation is to analyze with a unit of measure other than the victory % (to do so, what better than to humbly create my own unit of measurement). Its conclusions are very interesting and allow us to classify the races of the game into five performance levels.

Amazons statistics are probably very slightly overrated (by about 2%) by “mix-max predators” in matchmaking at low team values.

Halflings and Goblins statistics are scarce at high team values. All our best wishes if your goal is to climb to these summits!!!

At Blood Bowl, there are four main team groups. There are the Agiles, the Midways, the Bullies, and the Stunties. There are also some hybrid teams (ex: Lizardmen) and non-categorizable teams (ex: Vampires). If almost all teams naturally have the Stunties’ hide, what about the others? Would one group benefit from a natural advantage over another?

The collective imagination often asserts that the Agile teams would benefit from a natural advantage over the Bullies by their ability to dodge the big bastards and to circumvent them with speed. It is also of urban wisdom that the Midways would complicate the Agiles’ life since they reduce or cancel their speed advantage while being stronger. Similarly, the word also runs that the Bullies would see the Midways in their soup since they lose the advantage of strength while not being agile enough to confidently dodge away. In short, we would be in the presence of a “rock-paper-scissors” effect.

But what about it statistically? To verify, we selected five “emblematic” races per group (yes, the notion of “emblematic” is debatable) and calculated if one of these groups had a statistical advantage over another. Here are our results:

It is clear that some teams are competitive right out of the box (logically, they are often the same as in tournaments) while others reach their full potential only when they are well developed (Nurgles is a blatant example). Absolutely no team reaches its full potential at mid-value and being at that level means either transiting up, down, or stagnating.

The table also shows clearly that almost half the teams are on a very similar level with a TAR between 4.1 and 5.0. The second half is a bit lower but still very competitive with a TAR between 3.2 and 3.9. Chaos Pact almost earns its place within this group with a TAR of 2.9. Halflings are bad (1.8). Goblins and Ogres are abominable (0.3 and 0.0).

Finally, the statistical study proves that there is a rock-paper-scissors effect at Blood Bowl. With the same team, there is a good chance that you will alternate between being at the right and the wrong end of the stick.

These conclusions are almost wind. Here is why.

It is not because your chosen team is statistically better than your opponent’s that you will dominate. In the heat of a Blood Bowl game, several factors are compared between coaches, including:

For example, even if Wood Elves are statistically one of the game’s best teams, your ability to coach them may be abysmal. On the other hand, it is not out of the question that you could have the incredible magic touch necessary to successfully coach Underworlds. Yes, Wood Elves are statistically superior, but at Blood Bowl, any team can defeat any other under any circumstances with the right coach armed with good dice.

That said, if you magically coach Underworlds against masterfully coached Wood Elves, you will certainly row upstream. This leads us to…

Why injustices are good for your league

Imagine for a moment that you are your local league’s dominant coach and that you are masterfully playing Wood Elves. It can be a disaster for your closed ecosystem that you are coaching so well this dynamite on two legs. You see, all normally constituted human beings aspire to great honors, but your outrageous domination forbids them any hope. Disgusted, your preys leave the league and the predator that you are runs out of sustenance. Your league is terminated.

This scenario is so common that every year, an astronomical number of newly created leagues collapse due to this recognized phenomenon. Fortunately, Blood Bowl can be unfair enough to give coaches of good will a chance to restore some balance. Thus, a conscientious dominant coach will soon choose a statistically weaker team to offer a more accessible challenge to his peers.

There are also some other reasons to love injustices…

Some coaches appreciate the challenge of digging into the game’s poorest teams to find the hidden golden nuggets. Other uncommon specimens reject any competitive spirit and prefer to throw themselves into the madness of fluff. For those, choosing a Stunty team is the pleasure of playing without the pressure of winning. In any case, as many Stunty coaches will tell you: “Winning is so overrated!”.

Also, coaching statistically weaker teams is a good source of new learning for coaches who master the game well. For them, it is an opportunity to practice extreme chaos management, serial risk assessment, mood imperviousness to bad dice, and the ability to take pleasure in insane game situations.

Having established that the above statistics are at least partially – if not almost completely – useless, it is understood that experimenting is the best way to get an idea of ​the strength of a team … at least in your own hands. Fortunately, at Blood Bowl, there is a team for every coach!

Ian H. McKinley
Sweating, Jacyntha crept low through the underbrush, spear in one hand, machete in the other. It was hot, hotter…