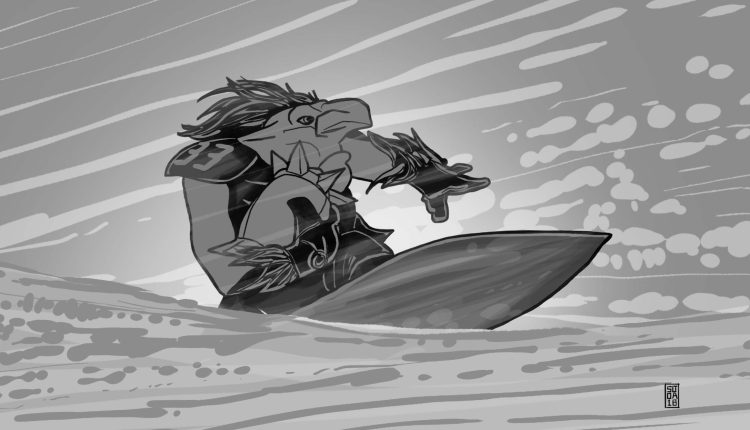 I have spent more than a decade of blood bowl observing what makes coaches luckier than others … And from what I saw, there never was a coach who could win four touchdowns to zero, game after game, just by being lucky. As far as pure luck is concerned, a coach has as many chances to dry clean his opponent as to be bleached.

So what is luck at blood bowl? The vast majority of coaches define luck as success apparently caused by chance. Apparently is a key word here because we rarely see all the levers that come into play to create said luck. Myself, playing thousands of games I have realized that luck is rarely a lightning strike, isolated and dramatic. It is much more like the wind, blowing constantly. Sometimes it is calm, and sometimes it is furious, and sometimes it comes from where you did not expect.

So how do you surf on the Winds of Luck? It is easy, but it is not obvious.

The first thing you want to do is to change your coaching attitude and be willing to take small risks that get you out of your comfort zone. Now, when we are rookies, we do this all the time as we learn how to play the game. We need to go from a coach who never scored a touchdown to someone who regularly does. And learning requires us to get out of our comfort zone and take some risks. The problem is, as we slowly and painfully become better coaches, the less and less we do this anymore. We sort of lockdown our coaching style and become less willing to push ourselves further.

Now, I spend a lot of time giving very good coaches encouragements to get out of their comfort zone and take some risks. “Come on, lad, push! Push, godd*mmit! Roll some godd*mned dice!” It is always fun to see what risks a coach is willing to take when under pressure! But, when one takes some time to observe and think, it is pretty clear that risk-taking is not binary as there are many levels of risk — notably strategic, tactic, emotional, social and ethical. And once coaches start to compare their risk-taking attitude with their peers, they quickly realize that everyone is very different.

So I encourage them to push, to take some risks that get them out of their comfort zone. I do this myself all the time. It all started some years ago. I was up against a good but not exceptional coach. And normally, I would have just cruised to a routine win. But I decided to take a little risk and played in an unusual way. We ended up having a fascinating game where I learned a lot about my future as a blood bowl coach. So about three-quarters into the game, I decided to push even further. My dice were very polite and said, “You know what, Taureau, this is not right for you, but thanks for pushing.” It’s OK. Pushing some more did not work out. The game closed. Cool draw.

But it did lit up something in me and I was soon investing some intelligence into reinventing myself as a blood bowl coach. Since then, you might say, “Oh, you are so lucky.” But of course, I am lucky all the time! But that luck results from a series of risks I took some years ago, starting by pushing out of my comfort zone. And any coach can do this, no matter where he is in his development — even if he thinks he is the earth’s most unlucky coach, he can do this by taking little risks that get him out of his comfort zone.

Luck is predictable. If you want to be lucky, you have to take more chances.

Your Relationship With Your Dice

The second thing you want to do is to improve your relationship with your dice. Obviously, everyone rational enough has understood that each die rolled has a huge impact on his game results. Consequently, it is just logical to shield ourselves from this unchangeable truth by playing conservatively. But, if a healthy dose of pessimism (or realism as I say) can help you reach the champion coaching level, it is just not good enough to become a legendary coach. Great coaches have outgrown their pessimistic mindset and learned to appreciate their luck. Though they surely do not expect it, they happily recognize it!

To be lucky, you must first acknowledge that you have been lucky.

You see, it is all rooted in rationality. At blood bowl, knowing when you are lucking your way over your team’s average potential is critical. Being constantly negative hinders you from correctly assessing what to expect from the game. You are deceiving yourself as a coach. Learn when to thank your dice as they need some love too! I do and I assure you it increases my luck!

So first, you need to take some risks and get out of your comfort zone. Second, you need to improve your relationship with your dice. And third, you want to generate some new ideas. Most coaches look at new ideas and they judge them. “That’s a great idea” or “That’s a terrible idea.” But it is actually much more nuanced. And in fact, the seeds of terrible ideas can grow into truly remarkable plays.

A good way of approaching this is to look at terrible ideas as interesting opportunities. I often recommend excellent coaches on training to challenge themselves when playing a weaker opponent by coming up with bad ideas and turning them into gold (which is, in short, what playing Stunty is). Here is what happens. Within about a minute in their game turn, they enter “genius mode” and then spend their last three minutes executing a brilliant play.

If you look at the best coaches around, the most innovative ones, well, you know what? They can all perfectly execute brilliant plays when the odds are against them. If other coaches could get in their heads and take a look at their thoughts, most would say, “That’s batsh*t crazy! Where does he get all this?” It is true that top-notch competitions are usually played mostly conservatively. But when things go awry (as they often do), a legendary coach has trained into generating new ideas on the spot to brilliantly improvise a win out of a defeat.

So, yes, sometimes coaches may feel like they are one of Nuffle’s neglected bastards, and sometimes, luck is a lightning bolt that only hits your opponent. But the wind is blowing constantly, and if you are willing to take some risks, if you are willing to really push, recognize your luck and approach some bad ideas as interesting opportunities, you will soon also surf on the Winds of Luck.

• How To Be Lucky, by PurpleChest

Ian H. McKinley
He’s got a dagger! Jacyntha ducked and felt the blade trim her hair. She dodged to the left and scrambled around…