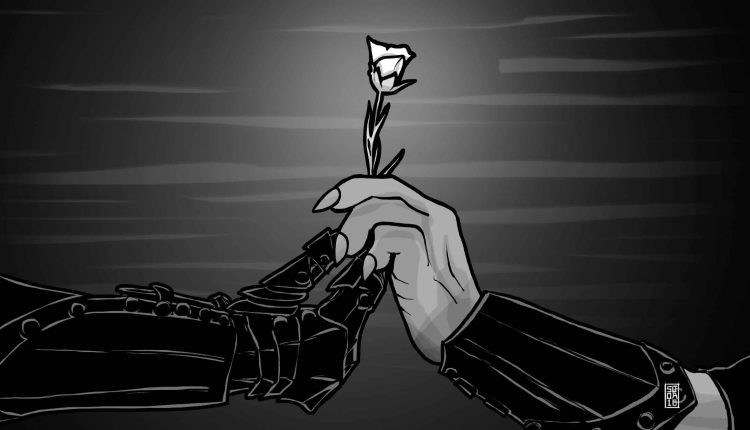 The devil is in the detail. I can roll nine consecutive pows followed by a lonely skull. What do I remember? The skull. Well, it seems I am not alone. Research shows that, unfortunately, we are all wired to focus on the negative. Obviously, being all stressed up and rancorous will not help us become better coaches. So, how can we fight our brain’s negative bias? According to many pieces of research, gratitude can help.

Knowing this, I attempted a new approach. Before every game, I thanked a dice roll that helped shape my team. I said something along the lines: “I’d like to thank that +AG roll on my catcher”. All was going well until some day an opponent answered: “Taureau, this +AG roll results from a touchdown your catcher scored in our previous game. But to score, your star Blitzer had to clear him the way to the end zone. If you really cared, you’d also thank him and all the other players that helped crystallize that touchdown. Without their contribution, your catcher wouldn’t have leveled up.” And I thought, “Hmm. That’s interesting.”

Now, I am a blogger, and for you, readers, I like to go on quests. Intellectual ones, at least. So I accepted my opponent’s quest. I began rewinding time and first thanked my opponent who did not mark my Blitzer. I then thanked my Blitzer who rolled a defender stumbles. But he could not have done his job without the Tackle skill. So I thanked the mundane skill roll he made and thanked my conservative skill choice. And then, as far as memory goes, I thanked the many dice rolls and coaching decisions that led to my Blitzer cracking bones and leveling up. Long story short, I even ended up thanking all my opponents that forged me into the proficient coach I have become.

I came to realize that my catcher’s +AG roll, like so much else in this game, requires the combined results of thousands over thousands of dice rolls, coaching decisions, and gaming experiences. Pows or skulls, sixes or snakes, reroll or not, push or hold, risk or draw, you name it. Just the thought of it was overwhelming, but also wonderful. It reminded me of the astounding interconnectedness of all Blood Bowl things.

Show your opponent some gratitude

I thanked my opponent for his great quest idea. His name is Skullcrusher, and he is one of the most upbeat coaches you will ever meet. Big smiler, enthusiastic gamer. He is bigger than life. But even for Skullcrusher, being a coach is hard. And that is because he is encountering people in a very critical state. You all know what it is: competitiveness.

Skullcrusher told me the hardest part is when coaches do not even treat him like a human being. They treat him like artificial intelligence. So, they roll pows and armors without even taking their eyes off the pitch. And while he is saying this, I realize … I did that. I sometimes am one of those a**holes. And at that moment, I vowed to take some time each game to make eye contact with my opponent. Because it is a reminder that I am dealing with a human being who, like every other coach, has his ups and lows. And that little moment of connection is so important to our humanity and happiness.

Be grateful for the pow. And the push. And the skull.

Skullcrusher then returned me the favor by sharing how to roll a three die block like a pro. And it is a complex ritual that ends up spraying dice all over the pitch. I then tried his method and got triple skulls. But in the moment, I was inspired to really let the skulls sit and meditate about the cruelty but also the sweetness of the moment. This idea of savoring is so important to gratitude because it is all about taking a moment and holding on to it as long as possible. And slowing down time. So that your game does not go by in one big blur, as it often does.

Some coaches are afraid that being grateful will make them complacent. On the contrary, research shows that gratitude makes you actively want to share. Sharing is a very, very important source of growth for any coach. And I experienced this personally. I mean, I am still mostly a selfish bastard like all minotaurs should be. But being grateful inspired me to see what I could do to help coaches become better. It got me involved. I am definitely not expecting a Bloodlitzer award, but it is a little something. And it is why I encourage you to practice gratitude. Because it is a game-changer.

Addendum: One of my favorite past conversations was with a coach who tried to develop the perfect interceptor specialist. And until this point, I had given approximately zero thought about developing interceptors. But I loved talking to this coach because he was so passionate. And the blood and sweat and tears he put into developing what he felt was the quintessential interceptor, and that I had never even considered. He says that failing an interception ruins a game. That it hinders his fun, which is so important to his gaming experience. So he is like the Steve Jobs of interceptors.

So he created that interceptor standing atop all those skill rings helping him to visualize his player on the pitch and hopefully to move him right where needed, to get that precious interception. And so I was pleased talking to him, and it made me realize there are hundreds of other masterpieces everywhere. And obviously, these mostly useless masterpieces are largely invisible on the pitch except to their creators. But when we notice them, they tickle that sense of wonder and enrich our gaming experiences.

Ian H. McKinley
As the echoes of the stadium crier’s voice died down, half of the already rancorous crowd erupted in fury. Some…