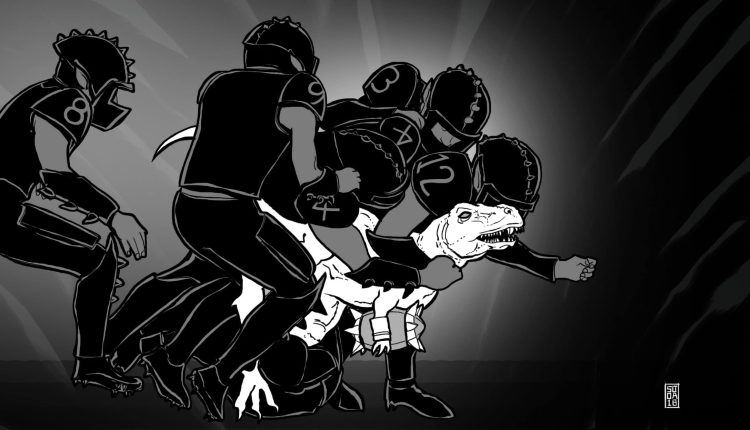 For most Blood Bowl legendary coaches, games are made of sequences, repetitions, similarities, and probabilities. They allow us to roughly predict whether achieving our goal is likely even before activating a single player. However, when probabilities and humans insert glitches in these constants, the result may end up far from anticipated. This is why, to avoid deviating from our goals, we must play as simply as possible … but even if Blood Bowl’s rules are simple, it is complicated.

A coach’s job is complex because he has to divide his limited resources in players and skills into countless possible goals. The goal principle largely explains why rookie coaches crumble in front of any serious opposition as there are few worst tactical choices than to drain your team’s strength on several goal fragments.

At Blood Bowl, it is critical to apply your meager resources where they make the most difference. Directing them towards a clearly articulated goal allows for a better unity of efforts. The unity of efforts is an essential coaching concept to grasp and certainly is an important measure of coaching skill. When a drive goes to hell, it is vital to unify the player’s efforts to restore the power balance.

When we unify our efforts towards a clearly articulated goal, we multiply our players’ efficiency. Luckily, the unity of efforts can be leveraged even further by using an efficiency multiplier. An efficiency multiplier is an advantage (or better yet, a combination of advantages) that makes a team more efficient than a similar one without this multiplier. This is one of the reasons why we, legendary coaches, are solidly in business. If our opponent does not leverage as much as we do, he is in serious trouble. Think tsunami level trouble.

A team’s hitting strength results from a mix between the players’ strength, their hitting reliability and their number on the pitch. The more your team leverages this advantage and the more it can wreak havoc without being hurt in return. This explains Blood Bowl’s “rolling snowball” effect: the less players you have on the pitch and the more quickly your last ones leave on a stretcher. In short, leveraging a hitting strength advantage towards a clearly defined goal is a major efficiency multiplier. It is pushed even further by simultaneously annihilating some of your opponent’s efficiency multipliers (such as, by limiting his mobility with clever player marking or by eliminating key skills from the game).

Ugly: One mobile player can pick up a ball and pass it to … nobody.

Better: Two mobile players can pick up a ball, pass it, receive it, and run it out of reach of half the opposite team.

Multiplied: A whole mobile team can pick up a ball, pass it, receive it, run it out of reach of half the opposite team and deploy tackle zones to counter the remaining half.

A group of players acting synchronously can apply a disproportionate amount of pressure on a similar but less well-organized foe. A well-oiled synchronism can be more effective than the opponent’s reactivity to disorganize it.

Coaching the most efficient roster can also be a major efficiency multiplier. That said, the efficiency of a roster varies wildly depending on what it is up against. Sad to say, but it also depends on whether a coach remembers and brilliantly uses the (sometimes very numerous) skills he picked. Knowing if your roster has the upper hand is an inexact science relying on rationals and gut feelings.

Keeping a fighting spirit, especially when facing difficulties, definitely has repercussions on the pitch. Napoleon is well-known for his commentary “Combativeness more than numbers decides victory”. A coach’s perseverance in accomplishing his goal is an important efficiency multiplier.

Simplicity is keeping it simple. Not “stupid simple”, of course … but rather in the sense of being unambiguous.

I would like to debunk a persistent myth. At Blood Bowl, legendary coaches rarely pull an infinite number of rabbits from their hat. It is much more the opposite. Legendary coaches skillfully juggle with the simplicity versus efficiency ratio. They expertly roll dice sequences less complex than their neighbors. They also methodically leverage everything in sight. Even if legendary coaches do not systematically reject the convoluted (and very astutely indulge when relevant), as a rule of thumb, the better a coach is and the less he plays convoluted.

Blood Bowl is overflowing with tactics and it certainly contributes to the game’s richness and complexity. Even so, the simplicity principle recommends avoiding all that is convoluted. When a coach plans and plays his game turn, he must make sure that it is as simple and straightforward as his goal allows. A simple plan monopolizes fewer resources and provides more leeway to creatively stabilize the anticipated new strength equilibrium.

Also, consistency in skills choices, a clear and familiar team doctrine and a solid gaming experience can also help to attain simplicity.

For example, a coach’s goal may be to steal the ball and score a defensive touchdown. It is not necessarily bad. However, if he greedily fails, he could lose after being taken out of position, without rerolls and without his best players. Achievable goals improve consistency. To easily recognize what is achievable, you must be familiar with what your players can manage with average luck.

Every game is different. What is an achievable goal varies according to every game situation. For example, if a coach wants to provoke a touchdown, he must unite his efforts early on because it becomes less and less relevant as the time left shrinks.

Napoleon also said: “Does not go far the one who knows in advance where he wants to go”. If your opponent fails something or if you roll good dice, it may be time to reassess what is achievable. “Did I eject enough players to relax part of the defense and to contest de ball more aggressively? Is it possible to hit the ball carrier without sacrificing the game if I fail? The ball dropped to the ground, can I swoop it and go all in to ensure a quick defensive score?”

At other times, your team will swallow the mug and you will need to reassess downwards what is achievable. “Should I now concede the drive and keep my strengths for a second-half comeback?” A legendary coach never wastes resources because goals are more achievable when there are enough players left on the pitch.

It is good to remember that simplicity is not necessarily complexity’s antithesis. For example, four 2+ dodges with a reroll are more likely to succeed than a single 4+ dodge without a reroll. A complex sequence can sometimes be the simplest to carry out. Unsurprisingly, a thorough study of the game’s probabilities is highly recommended.

Having clear goals towards which to converge already increases your players’ efficiency. Adding some of Blood Bowl’s efficiency multipliers to your coaching formula can bring you closer to invincibility. If you also play your games as simply as possible, your opponents will wonder why your fiery dice do not burn your fingers … but you will know that it is because your genius is intangible.