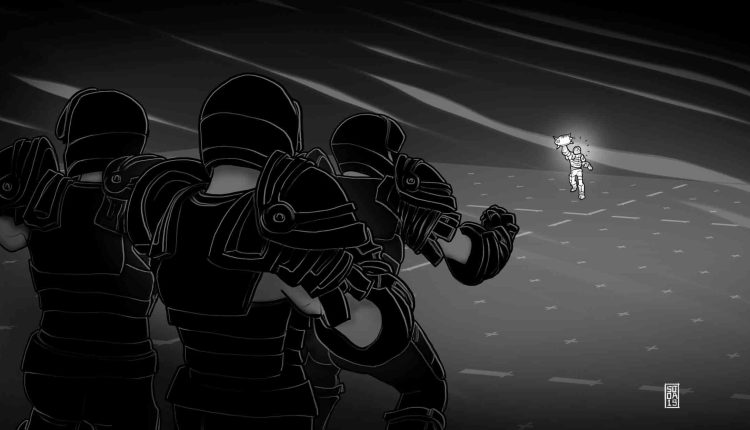 Pulling Off a Long Feint

A long feint aims to goad your opponent’s screening players and mobile resources into contesting or stopping (dead) your ball carrier on a flank. As soon as your opponent compromises enough players and player skills on your feint, you then swiftly change the ball of flank.

Contrary to a small or a short feint, a long one is conducted before the real breakthrough and far from it. This tactic can cause an impulsive or inexperienced opponent to move “All In” on it. The resulting destabilization of the defensive equilibrium is often enough to extend a rushed and shaky two-turns touchdown into a comfortable and more secure three-turns attempt. This tactic even has some merits against a very skillful coach since a long feint is then a kind of pressure that could persuade him to move resources he would otherwise use to stick spokes in your deathroller’s wheels.

Agility teams are the most well-suited to long feints and can score an impressive number of touchdowns using this tactic. Likewise, other teams that are fielding quick players make good use of it, notably Humans, Necromantics, and especially Rats with their quick Gutter Runners Quatuor. All those teams can further secure their long feint attempts by developing appropriately skilled players (Dodge and Catch) as this tactic requires a handoff and often some dodges.

I’m a Word Salad Hater.
Gimme Some Meat to Chew On!

Disclaimer
No play is as clean as the graphs below because their mission is to convey you a concept. Every Blood Bowl game is a sinking boat and your success depends on your ability to keep yours afloat by creatively patching, coping, and maneuvering. Make no mistake, either you will skillfully sail your ship to port or you will go down with it. Whatever happens, history will hold you responsible.

As in any use of a tactic, you must completely understand why you do it.

Let’s say that your goal is to lure your opponent out of your way and score in three turns. No more, no less. Two turns leave you uneasy as your opponent could score back. Four turns … Well … You have three turns left.

Great coaches plan ahead, even if they often alter or abandon their plan on the spot.

PUT SOME WEIGHT IN YOUR FEINT!

This example puts Necromantics (necros) at the forefront because while they can use long feints, it is unexpected of them. With Elves, Humans, and Rats, it is a given. Here, they are up against averagely genderless Whites. Think of players with a movement of 6 anonymously mixing strength 3 and 4.

Here is the initial setup. Black necros are receiving the kickoff against a very classic boat defensive setup, They have put almost all their weight on their left flank with two Ghouls (G), two Golems (Go) and a Wight (Wi). The two Werewolves (W) are in charge of the ball. This setup clearly hints at a quick offensive thrust on their left flank. Are there any more clues an opponent can ask for?

Our goal is to score in three turns, no more, no less. So, let’s take a look at the timing.

On Turn 1, Righty the Werewolf (R) picks up the ball and hands it over to Lefty the Werewolf (L). Since you have to cover Righty’s pickup and Lefty’s catch with a team reroll, you must avoid reroll eating go for its. Sadly, it means that any kickoff landing outside the “No GFI Handoff Zone” aborts or alters your long feint unless you are feeling lucky. That is your curse for not coaching zesty ball-throwing elves. If the kick is good and the handoff goes well, Lefty runs his *ss off to the Turn 1 scoring zone while Ghouls and Golems move in the support zones to screen him.

On Turn 2, a now hopefully badly pressurized Lefty runs back and hands off the ball to Righty who then proceeds to the Turn 2 scoring zone. Planning a screen for Righty is trickier because you do not want to give away your intended play. If you keep two mobile players on your right wing and a mobile Werewolf in the center, it will be very obvious that you can play a half-cage along your right flank’s sideline, and your opponent will defend with that in mind. Consequently, you must carefully hide your second mobile player. Here, both Wights are in of the turn 2 support zones, though the left Wight’s support is conditional to a few dice rolls. He is the hidden supporting player.

On Turn 3, provided Nuffle or your opponent did not sabotage your plan, Righty runs through a litter-free lane and scores.

A successful ruse is a believable play focused at the right coach.

Okay, you commuted to the venue with China_Gurl, an enthusiastic blood bowl coach. By enthusiastic, I mean a bit heavy on the steering wheel. You know, the kind of girl that merrily zigzags through traffic while frenetically swinging the heating control from left to right. So, you are up against her and you have the feeling that she coaches as she drives. And what the hell! If everything goes wrong, a failed cocky long feint could make her laugh, and laughs are good as it will help you get her phone number! With all this in mind, you decide to go for it!

It is time to plunge and sell your sneaky ruse.

Happily, no disastrous kickoff event is rolled and the ball lands very nicely. Righty the Werewolf picks it up and reluctantly hands the toy over to Lefty. Your Zombies make short work of the line of scrimmage. You even push the fallen players to the right in an effort to add credibility to your left feint. You also wisely push them shallow because you know you will eventually run deep and every square counts. Now that the table is set, it is time to feast!

As planned, you rush all your available weight on your left flank. You even generously send in a sacrificial Ghoul! Hey, you must expose something juicy if you want to hook your opponent, and you know too well that with seven of armor and no Regeneration, Ghouls are very juicy! You also take great care to prevent your left feint from being cut off from the rear by a single Blitz as it would then force you to score in two turns. You even move your right-wing Wight to the left in an effort to add some credibility to your left feint, while providing support for your next turn’s line of scrimmage blocks.

5 – Open Your Mind To Feedback

Observe how your opponent reacts to your indicators.

China_Gurl is more adroit than expected while being true to her enthusiastic nature. Surprisingly, she did not heavily mark your players, which could have complicated your situation. But she enthusiastically blitzed your sacrificial Ghoul and swung her team in your feint’s face while keeping some mobile reserves in the middle of the pitch. Maybe it was just some instinct, experience, prudence, or conservatism. She surely did not play terribly and screened reasonably well, but she definitely could have defended more aggressively. Anyway, it is far from enough to make you reconsider your long feint.

As a first action, Lefty runs back and handoffs to Righty. Then, the zombies block and push all the tackle zones out of the Wights’ paths. The two Wights move to the support zones depending on how the blocks on the line of scrimmage fared. Some go for may help secure the play further if you have not already spent your team . the Werewolf then moves in scoring range, more or less deep depending on the Wights’ positioning and the opposing players’ reach. Depending on the situation and if you have a reroll left on your next turn, you could position Righty a square or two shallower. This is especially true if the Blocks on the line of scrimmage went poorly and prevented your Wights from screening deep.

We do not know exactly what the Whites are made of… and Flesh Golems are strength 4, which gives them a bit of leeway to blitz on their own. So, this consolidation could certainly have been more optimized. Anyway, you mark the most dangerous players first (Strip Ball, Tackle, Wrestle, or Frenzy) relatively to Righty the Werewolf’s skills. You mark Tackle if he has Dodge or mark Strip Ball if he does not have Sure Hands. You get the point. That last cocky Ghoul dodging twice is some nice icing on the cake and in the realm of probabilities. You should not plan on it to work, though.

In the graph above, the starred players are “bagged”, and, left on their own, they need 2 dodges or a Blitz to regain their mobility. Here, the Whites are mostly done for. Sure, they can still put some small pressure on Righty to make you roll dice. They could also attempt a miracle. Whatever they play, you should have enough maneuver margin to score on your Turn 3 as securely as can be.

Say you have a few extra turns to grind and your opponent coaches like a potato. Suddenly, it strikes you that you could attempt the maneuver again in a double long feint because it just needs another 3+ handoff to succeed! To be honest, I would not attempt it with necros unless I was confident in the game’s outcome. A single successful long feint is already enough luck for necros and I feel I would be overplaying what they can do on average. Admittedly, a double long feint becomes a far more reasonable option if you are coaching something elvish.

An additional bonus tip will be added here following the next few articles.

Attempting a long feint is about as difficult as coaching can be. All it takes is a deep kick, some bad dice or an aware opponent for your play to blow into an incredible waste of brainpower, resources and time. Anyway, you should always be to alter or abandon your long feint on the spot. I do it all the time. I coach for my trashcan. It vomits aborted plans. But trashing a plan is only a great excuse to craft an even more evil one.

Ian H. McKinley
“Xonyx the Strong rose to become a fine general and an inspiring leader. She outwitted her enemies and provided…