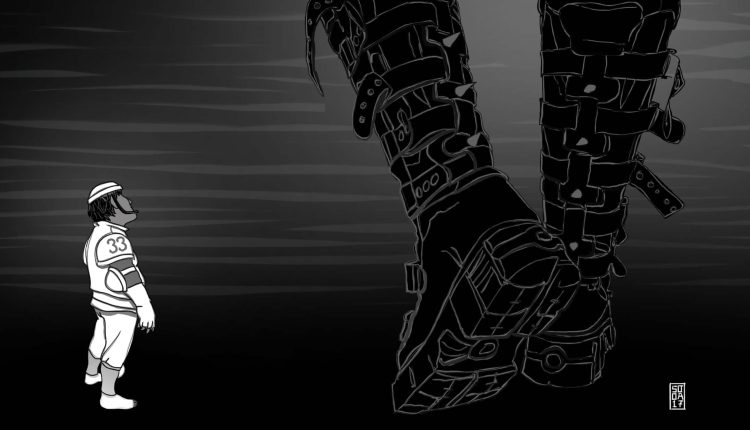 what to do against a strong team

Here is a typical scenario

“Help, a gang of lumberjacks trashed my team! They had the Guard skill everywhere and Mighty Blow on almost all their players … Oh! And they two-dice blocked me throughout the game.

I won the coin toss and elected to receive the ball. I scored in three game turns because I didn’t want to delay as my players were leaving the pitch at an alarming speed. When my turn came to defend, there was nothing I could do and a big part of my team went to the KO and casualties boxes. His cage was impenetrable and there was no way to break it. He scored on turn eight.

The second half was similar but twice as nightmarish. Now outnumbered, I was even less able to defend my half of the pitch. He swept my players clean off the pitch on turn fourteen …

How can I defend against a stronger team than mine? Is the primary strategy to pray for a deep kick (ideally in the opponent’s rear end)? It seems to me that from the moment a cage is formed, I have no chances at all.”

coach to Your Team’s Strengths

At blood bowl, the winner is usually the coach who best managed to leverage his team’s strengths and in the scenario above, it was the opponent. We cannot win them all, there is no shame in that.

When facing a stronger team than our own, it is often better to stay at a distance – well, not that far as a single square space is enough, and use your agility and speed advantage to move your players into skirmishing positions two squares apart. Your opponent’s strength advantage will be greatly reduced if you force him to scatter to man-mark you. It is also a great way to counter the Guard skill.

Carefully weigh the consequences before following up a pushed opponent as you don’t want to gift an easy free block in return or lose an assist on another block. While blocking, be also wary of bunching up your players in the process. As a rule of thumb, it is mostly better to stay scattered to reduce your opponent’s strength advantage.

Once you have done all your two-dice blocks and dodged all the Dodge skilled players to assist some other two-dice blocks, you will have to make heart-breaking decisions that should mostly rely on the game’s probabilities. For example, one-die blocks with the Block skill are less risky than dodging 3+ agility players without the Dodge skill.

Once all that was likely to succeed is done, players without Block, Wrestle, or Dodge who do not control crucial tackle zones whose loss would be catastrophic should probably attempt dodges to escape upcoming blocks and reposition. This is especially true if they have an 8+ armor and are man-marking a Block and Mighty Blow player. If the dodge fails, at least, the grass does not have Mighty Blow.

Great coaches‘ offensives score most of the time.

That is why scoring in three turns or less against a great coach is extremely risky because he then has enough time to comfortably score back – which he will succeed most of the time. He will then only have to grind the whole second half and score the winning touchdown on turn 16. This scenario is the most typical springboard to a 1 – 2 defeat.

Here are some other tips to poison a stronger team’s life.

Ian H. McKinley
Cassandra Thordwall shook her head to let Jacyntha know exactly what she thought of that idea. Then she added,…