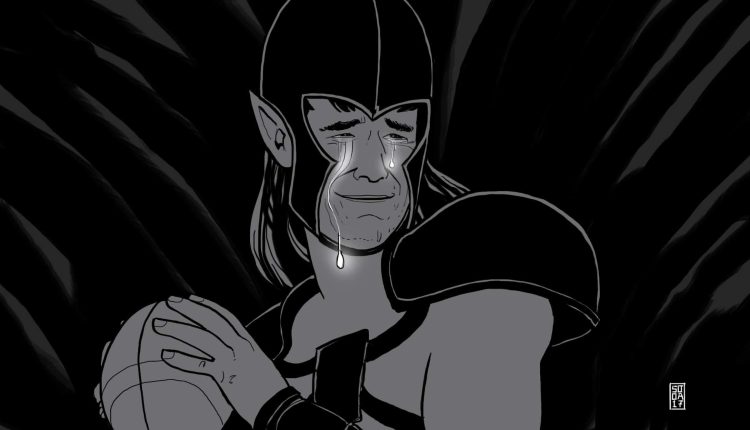 When Nuffle decides to rot a game by granting too many bad dice, each coach absorbs the insult differently. If some coaches take the outrage without flinching, others will laugh, moan or get angry. Anyway, everyone has to face the facts: Blood Bowl is a “tragic heroic comedy” and sometimes, these three acts are played during a single game. Rookies be warned, to enjoy this game and come back to it, it is necessary to cultivate some masochism in your secret garden.

We sometimes have the feeling that our dice’s performance can objectively be measured by analyzing their in-game results. This is a false impression! An analysis of this type is extremely subjective since each coach has his own opinion about the actions that are reasonable to attempt when solving various play situations. It is thus frequent that a coach claims to be unlucky while his adversary wonders what is so terrible because, well, if it was so terrible, he would have noticed, right?

“If you have a skulls problem, I don’t feel bad for you. I have eleven problems that want mine!”

Bad Luck, From Rookie To Legend

The rookie coach often perceives “his bad luck” as extremely determining to a game’s outcome. When defeated, he can become very emotional with his dice (rather than noticing his string of bad decisions). A rematch will sometimes be asked and will probably be lost again by some other bad dice’s fault. It is better not to turn the rookies’ misfortunes lightly because it could be perceived as elitist!

A legendary coach victimized by his dice is in a better position to appreciate his situation’s comic. Often, he is more open to discussing and laughing and if he still sporadically moans, at least he does not take it too personally. The legendary coach understood that if one day, he could not emotionally manage his bad dice, he will have to shamefully return to live in his mother’s basement and give up his pretty wife and cool children.

Between the rookie and the legend, there is this coach with whom you have to walk on eggs because he is about to crack. Either he is on the verge of accepting a coaching life punctuated by misfortunes, or he is preparing his crusade beyond seas and mountains to shovel his ex-favorite dice in your rear end.

Ian H. McKinley
Up and Under is an innovative collaboration between an award-winning artist and a recognized writer of…