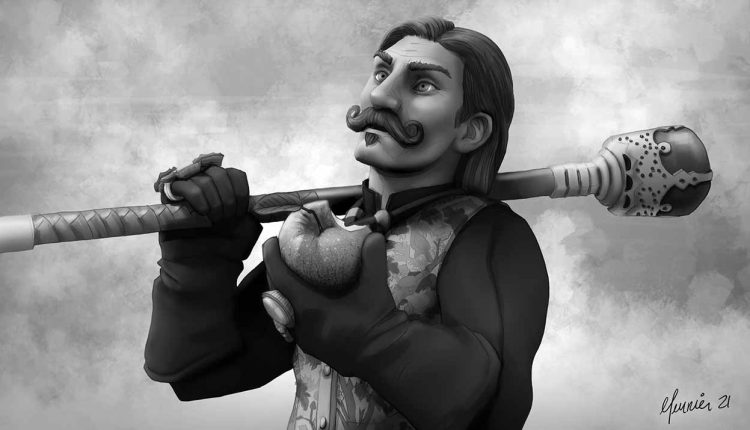 For some, a win is a win. For others, a tie is a win. For others, a loss is a win if the other team was severely mangled. However, for a tournament, a win is a win, a tie is a tie, and a loss is a loss. Having come off winning the Waterloo Blood Bowl League, and after enjoying several days on the Tilean beaches thanks to our sponsor, Taureau Amiral, the River City Gunners entered a charity tournament, Bosom Bowl V.

This tournament had a total of 18 teams that would compete for the Golden Bosom. This being a charity tournament, all proceeds and donations went to Breast Cancer Research, and so we were given special training options depending on what part of the body we wanted to focus on. The part our team chose was the Brain, since this is what we use mostly, which gave me the ability to teach Pro to five of my players. Naturally, I chose to teach our Ogre, our Thrower, two Blitzers, and a Bodyguard. Because of the tournament set-up I was only able to teach another Bodyguard the best skill he can use – Guard. Thankfully, I could field an Ogre, one thrower, two Blitzers, four Bodyguards, and three Retainers. Unfortunately, I could only afford 11 players.

Once the format was over and the referees checked our credentials, our opponents were assigned. Our first draw would be against a Chaos Renegade team, the Roanoke All-Stars. I will say this first: the match started horribly. We kicked off to the grotesquely ill-mannered All-Stars and immediately, on their first two hits, they casualtied two of our three Retainers. Looking over the pitch, I could feel the glee dripping from the face of the All-Stars’ coach. Now, the dread you feel when this happens can only be solved by one thing: hope. My hope was to stall his drive as much as I could and use my Blitzers to harass his ball carrier at every turn. My other hope is his three Big Guys would fail to participate in any given turn. My other hope was that they would get cocky. Luckily, all three of these hopes would turn into reality. Our Blitzers were not only able to harass a ball carrier, but knock him down and pick up the ball! Underestimating these quick players can cause severe migraines for opposing coaches! Also, although we were down two players, they were Retainers. Bodyguards are not only great roadblocks, but they can Wrestle even Big Guys down. By the end of the first half, the score was 1-1, and unfortunately for me, the Bodyguard with Guard was also casualtied. However, the All-Stars’ Ogre was as well. They underestimated a Pro Ogre able to dodge out of a tackle zone to blitz their Ogre into the stands. Thankfully, the crowd in this part of the stadium was full of Gunners’ supporters which led to the casualty. Part of great coaching, as I well know, is correctly identifying the precise moment to take a calculated risk and then be daring!

The second half started with a kick to our side and we continued to be underestimated. Thanks to some idiotic Big Guys, very fast Blitzers, and some key knock outs, including their Minotaur, the Gunners were able to pull away with a 3-1 win. I will be honest, I never would have thought that result would have occurred after the first two plays of the game, but I also hadn’t had my pre-game Bordeleaux 2378, now did I Nathaniel? Well? I’m still waiting for an apology!

The second match was equally disturbing. We drew the Blue Ridge Bashers, an Ogre team fielding all six Ogres. Now, I am not particularly perturbed by facing an Ogre team, but I do become very wary against one that fields six of those monstrous idiots. We received the kickoff in the first half and thankfully, our Ogre and players were able to force their Big Guys back which would allow us some breathing room and force them to come up with a game plan on how to attack us. One issue playing a team like this can be mitigating casualties but if you can keep them at arm’s length, it becomes very tough for Ogres to lay any hits on you. Nuffle turned in our favor, however, and soon our own Ogre put one of theirs in the Casualty box. This would lead to a better opening for our team to maneuver around the hulking dimwits, placing Bodyguards in the paths of any blitzes that might occur. After putting one more Ogre in the casualty box, we were able to pull away quite easily with a 3-0 win.

Now, as is usual with an Imperial Nobility team, we found ourselves in the top match. While there was one other Imperial Noble team (it seemed their coach trained five of his players with Fend), we would never face them. Instead, we looked across the pitch at a Skaven team, the Sneaky Shankers. This match would prove to be very fun as the Shankers forced me to do something I rarely have to: strain my brain. Fortunately, or unfortunately, for both teams, neither could gain the advantage through knockouts or casualties. Although we would eventually get a casualty apiece, most of the game saw players who brought the toughest armor surviving hits, despite getting knocked down consistently and often. This match also saw an amazing amount of use of the new skill I trained my five players: Pro. Most of the time, just when I thought my players would trip while trying to dodge, they used their professionalism to correct themselves and prevent any turnovers that way. At the end of the half, our Blitzer, Count Fowler, was forced to make a daring play. Because we couldn’t keep rats off of the pitch, their sneakiness and their quickness meant that they could provide a lot of obstacles to our team. Thankfully, Count Fowler was able to spot a small opening when he dodged through two tackle zones, then through another tackle zone, then dodged away from the Shankers, and then Rushed twice to score our only touchdown of the game. By the first few rounds of the second half, the Shankers had tied up the match with a touchdown of their own from a ridiculously fast Gutter Runner. The rest of the game involved multiple tactical plays forcing consternation and frustration from both sides. By the end, the score remained 1-1.

With two wins, a tie, and tiebreakers on touchdowns, it would be the Gunners that came away with the Golden Bosom! While raising the trophy, I could have sworn I saw Gorn glaring at me between an ecstatic and gracious crowd, but it could have easily been a dung cart.

At any rate, I will leave my dear readers with this. Imperial Nobility is not to be underestimated. Imperial Nobility with Pro is sweet music to our ears. And should you face an Imperial Nobility team coached by myself, Baron Rhouven von Wurzenheim, I will be more than happy to educate you in the proper ways to play this beautiful, bashy game.

Takeaways for other Imperial Nobility Coaches: Only take your team to a tournament where you can field all of your positionals. Decide early if you are going to rush with the ball versus pass with the ball. You may want to save some money and not field a Thrower. As much as I love Duke Kaiser, he really could have been laying back home while I took another Retainer and other staff. Lastly, never underestimate your own team- early casualties will not necessarily mean a loss.

Baron Rhouven von Wurzenheim is a renowned coach from the Empire but who has enjoyed great success in Bretonnia. Having returned to his native city, he deigns to share his wisdom at coaching teams recruited from the Imperial Nobility (with a few hangers-on to protect the high-born stars). His wisdom ... and his sense of self-importance ... demand his exploits be documented.

Ian H. McKinley
Cassandra Thordwall couldn’t imagine what Karsgaard Neuvil was fussing about. “How hard can it be to beat a few…