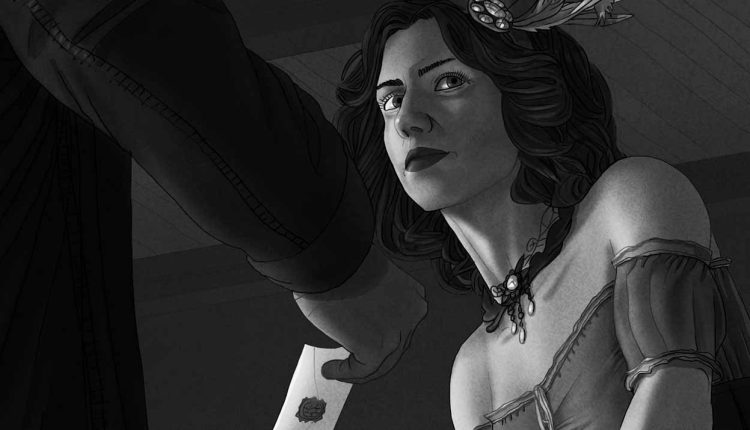 44: Is this a letter of resignation?

The first season of the Mytilan Militantes comes to an unexpected end in the Blue Blood Cup Final.

“IS THIS A LETTER OF RESIGNATION?”

Cassandra Thordwall, the of-late melancholic owner of the Mytilan Militantes, grew even more morose. “ ‘Mistress Thordwall?’ What happened to ‘boss’?”

Umberto shrugged. “You’re not my boss any longer.”

She held up a menacing forefinger. “That Grimmy Grimejacket’s got a lot to answer for. First he demands a wage increase for the players, then he convinces you to resign?”

Umberto shook his head. “No, it’s not like that. I went to speak to him, see. About the best way to move forward. He heard me out and agreed I couldn’t get anywhere protecting you from assassins.”

Thordwall rose from her chair, came out from behind the table that dominated the room she used as an office in the Kingfisher Inn. She hopped up onto the table’s corner closest to Umberto. “We’ve been together a long time, Umberto. You were the one who talked me into coming here, to Guayamartí, to start a footy team. Do you really want to leave me now?”

Umberto pursed his lips. “No, not really.” From beneath his ever-present coat, he pulled out a second envelope and handed it to her. “I understand you’re going to be filling a vacancy you’ve got as Head Coach of the Mytilan Militantes. That there is an application for employment. I hereby submit my candidature for the job.”

Umberto suddenly looked more nervous than she’d ever seen him. He fidgeted and added, “I come with impressive credentials; I recently coached the Mytilan Militantes to the Blue Blood Cup Final and served as their Thane of Player Personnel.”

“I recall making all the arrangements to bring in players to the Militantes.”

“More’s the pity,” he said with a sly smile. “Maybe Queen Beatriz wouldn’t have been so pushy about kidnapping some of our players.”

“One of our players.”

He nodded. “One. But she tried it twice.”

“So you want to drop the bodyguarding and devote more time to the footying? And a pay raise, I imagine.”

“Grimmy says he can work out the pay details with you afterwards.”

He chuckled. Umberto rarely chuckled. “When have you been afraid of rough seas?”

They stared at each other a long time.

Finally, she stuck out her hand. He took it and they shook. “Welcome aboard,” she said. “Come tomorrow, I expect you to get right to work; you’ve a cup to win and there’s only seven months until the pre-season kicks-off again. You start tomorrow morning.”

“That leaves tonight. Want to go to The Quarterdeck? I’m reliably told it’s the finest wine lounge in the Merchant Quarter.”

He smiled. He rarely smiled. “Normally I’d love to, boss, but see, it just so happens I’m already going to The Quarterdeck. There’s a top-notch Montezino Superiore they’ve got that Myra wants me to taste.”

He got to his feet. “Sure do, boss. You’ve met Myra. She’s Eguardo Giamucci’s steward. Tonight she’s taking me over to taste that wine. You know, normally I’d be happy if you joined us, but …”

She waved him away. “I know, I know. Enjoy yourself. Remember … you get right to work tomorrow. I want to win that cup.”

Jacyntha sent her silent prayer to the Jaguar and opened her eyes. She was alone in the temple the Xonyxas had used since their arrival in Guayamartí (the monks who ran the place certainly understood discretion).

Thinking of understanding … Karolyse had understood and had given Jacyntha a hug as they had trudged off the field, runners-up medals around their necks. Anahuark, too, had understood and had said as much. Jacyntha hoped the others would come to understand. The Xonyxas lived in a world where folk thought women had to be given things, stripping them of their agency, their ability to stand up and take something or step into the world and become something. The Militantes couldn’t win a league title because some Sylvan – some male Sylvan – decided to make a point of carrying the ball that would score the winning touchdown to the goal line and setting it down on the turf an inch away from the chalk. Even had the Militantes prevailed in overtime, no one would have considered them genuine champions.

Ell will forgive me, in time.

Jacyntha turned and saw a dark-haired young woman with bright eyes step forward. In one hand the girl held a tome bound in a worn leather jacket, in the other she held a quill. There’d be a jar of ink stowed away in the girl’s pockets somewhere. There was a folded broadsheet wedged in between the pages of the tome.

“My name is Thalia Espinas. I’m a scholar. I’m working on an account of the Blue Blood Cup. I’m sorry you lost the game but it was the most exciting final in years … and the strangest … and it crowned a brilliant season for you. May I ask you some questions?”

The girl sat down on the bench beside Jacyntha. She took up her tome in both hands, removed the broadsheet and set it on the bench, fished inside a pocket, and pulled out a jar of ink. She uncorked the jar and dipped her quill. She looked up.

“Why did you give the ball back to Pierce Rosethorn?”

“Because you don’t get given a championship. You have to earn it.”

“We all saw him say something to you. Was that it? That he wanted to give you the championship?”

Jacyntha shook her head. “No, it was something more personal … dealing with his sense of personal honour.”

“He’s said he’s retiring. He’s bidding the sport goodbye at the pinnacle of his success: Player of the Year, the cup final’s Most Valuable Player, champion. Do you aspire to such accolades?”

Jacyntha gave a smile that felt false. “I have to reflect on disappointing my teammates, on falling short as a player, on my future. I can’t think of Pierce Rosethorn’s laurels. He’s the champion, I’m not.”

The girl seemed puzzled by the answer. “Well, when you joined the Militantes, was it to become a champion or to become a footy player?”

She smiled. “It was to become a member of the Queensguard, actually. I saw becoming a footy player as a way to develop different skills than I was honing patrolling the jungle all the time. Skewering Geckoids gets stale after a few patrols. I thought this would be exciting.”

She nodded. “By the thirteen sweet hells, it was.”

“Thirteen sweet hells? Is that something out of Xonyxa mythology?”

“No, not at all!” She shook her head and couldn’t help but smile. “It’s just a saying I heard a lot in my time here.”

“It’s not a saying we Guayamarteños use.”

“No, I only ever heard it said by a foreigner. I like how it rolls off the tongue. I’ll probably use it more often.”

“So, are you in Mytilan’s Queensguard now?”

“No, that wasn’t an option. It was either nothing at all or Queen, if you can believe it … to two different kings of Chivalria no less! No, don’t look at me like that … not at the same time! And it only would have been one of them.”

The girl smiled. “And you’ve just had an award-winning first year. I’d like to document your second season.”

Jacyntha leaned forward. “What did I just have?”

The girl’s face dropped. “You hadn’t heard? Oh, I’m sorry, Mistress Jacyntha. It was announced this morning. I didn’t mean …” She took up the broadsheet from the bench and handed it to Jacyntha. It had the Sommer Sea Football League’s coat of arms at the top. She unfolded the document and looked it over. A name down at the bottom caught her eye and she read the entry.

Ian H. McKinley
Jacyntha glanced at her sisters; it was clear they didn’t know what to make of Umberto’s declaration either. She breathed a sigh of relief; she had been worried she’d missed…
Read More…
Webseries

Ian H. McKinley
Up and Under takes place in an astounding world of dangerous continents, stunning archipelagoes, and bountiful seas. This map will help you navigate around its corners and see…
Read More…
Share