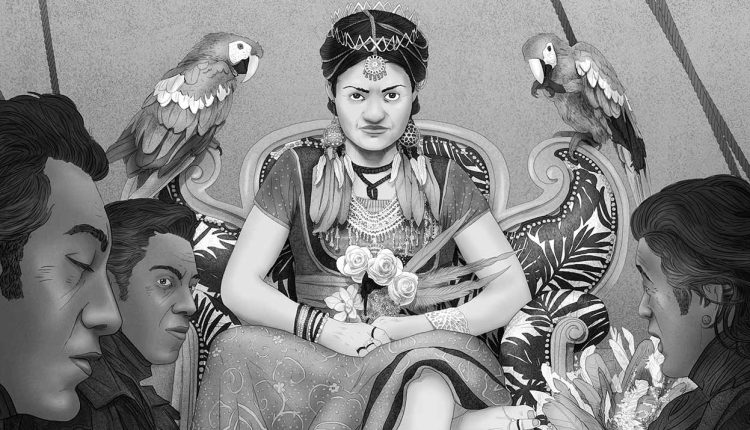 Travelling from Halos to Guayamartí aboard Queen Beatriz’ flagship, Duc Tancred de Baston protests to the Queen and to his rival footy team owner Cassandra Thordwall that he could not possibly fix the outcome of a match. It would dishonour him. The women point out they’re not asking for a fixed result, just that his team, the Imperials, not risk fielding their best players in their last game of the season against the Mytilan Militantes. After all, his team has already qualified for the play-offs. Reward in the football stadium is less important to the duke than the restoration of his nephew onto the Chivalron throne, so Queen Beatriz offers the help of Mytilan’s navy in such an endeavour, providing they come to an agreement on other matters, including one thing that solves a puzzle in Thordwall’s mind. Ever since the beginning of spring, she had asked herself why Mytilan’s Queen would reach out and propose that Pillaging Peggy, Thordwall’s alter-ego, launch a footy team?

Upon reaching port, Thordwall returns to her former ship, the Menace, and speaks to her team captain, Jacyntha. Below them, on the wharf, awaits the captain of the Gloriana Quarrels, Pierce Rosethorn, Jacyntha’s erstwhile lover. Thordwall says Jacyntha can’t hide from Rosethorn forever, to which the Xonyxa underscores her desire to best the Sylvan on the playing field. Jacyntha admits to being Queen Beatriz’ daughter and says she’s determined to build a life for herself away from her mother. Mindful of the bargain struck between Queen Beatriz and Duc Tancred, Thordwall says Jacyntha can’t hide from her mother either. She advises Jacyntha to confront the Queen, otherwise “…you might be in for a nasty surprise.”

Pierce Rosethorn despite carrying a grand bouquet of flowers, dodged out of the way of the hand Jacyntha thrust at him to push him away.

“I keep telling you,” he said, “the moment you lay a finger on me is the moment I retire.”

She turned on him. “Gimme those!” She snatched the bouquet of flowers, threw them onto the cobblestones, and then jumped up and down on them. Then she picked them up and threw them at the Sylvan. Of course the bastard caught them before they hit his chest. “I don’t want your stinking flowers!”

He glanced down at broken and battered orchids, carnations, and waterlilies in his hands. “Hmmm … well those were for Karsgaard.”

To her horror, Jacyntha felt her jaw drop open.

“I’ve known him a long time. He takes it very hard when he loses a player. I am sorry for your loss, Jacyntha. I know Occlo was a good friend to you.”

Rediscovering her anger helped her overcome her shame and horror. “Shut up! You know nothing about me.”

“Come now. I knew who you were from the moment I set eyes on you. But I see you’ve changed since I last saw you.”

She nodded. “Yes. I’m not a blubbering girl in thrall to her emotions. I’m a woman determined to keep shit like you out of my life.”

She stormed off towards the Luffing Lateen, where Sam Gosling would be putting on a lavish celebration to welcome her teammates and her back to Guayamartí.

She spun around. “What?”

He pursed his lips. “You know … shake. Tremble. Do his hands tremble?” The smarmy Sylvan actually looked concerned.

“You’ll have to ask him.” She stormed off, but her walk to the Lateen wasn’t a happy one; for all he was a bastard, Rosethorn was as good an apothecary as he was a footy player. And here he was, worried about Coach Karsgaard.

A shiver ran up her spine, though it might have been the autumn wind blowing off the Sommer Sea or the cloud that passed in front of the sun.

Cassandra Thordwall watched with an amused smirk on her face as Duc Tancred de Baston pushed past the damned inquestor who had been hounding her since her raid on Eguardo Giamucci’s villa. He also pushed past Rennigan Slythe and the detachment of Hierarch Guards who had come to arrest those involved in the duke’s alleged kidnapping.

Well, “unproven” might be a better term to use than “alleged”.

The duke flagged a mateo and called back, “Cassandra, dear, wouldst thou be so good as to expedite my baggage up to my abode.” It was said as an order, not a question. “I believe thou knowest where I reside on Ruelle des Gambettes.”

He managed to accumulate baggage? He had nothing more than the clothes on his person when we snatched him away.

Nevertheless, she nodded and gave him a friendly wave. His voice boomed back at them all. “I come, dearest Gwennifer! I come with haste!” He gave the order and the mateo rolled off.

The inquestor looked flummoxed, what with the supposed victim of the crime she wished solved denying any outlawry had occurred in the most casual of manners. Thordwall decided to go for the kill while her adversary was unbalanced. “You, inquestor, Queen Beatriz will want to speak to the procurator. Fetch him.” The woman’s expression went from flummoxed to alarmed. “Oh, and I expect Her Majesty will want a word with you, too.” Alarmed became panicked.

Thordwall turned to her next target. “Rennigan Slythe! How nice of you to greet us all. I have a communiqué from your counterpart in Halos.” Umberto fished beneath his coat and pulled out the wax-sealed scroll the Dwarf, Dwarrig, had asked to be delivered to the Sommer Sea Football League. “It outlines the measures he took to give the Mytilan Militantes a measure of justice for the many wrongs inflicted upon them.”

Slythe took the scroll, glared down at it for a moment, and then tucked it away. She knew he couldn’t read and was thus not surprised he didn’t crack the wax immediately. He had noted the league’s coat of arms on the seal, however.

“It explains why he penalized the Duskdaggers three points in the standings and directs the ownership of the Guayamartí Wharf Rats to keep the hell off my back. Got it?”

Slythe shook his bald head. “Now, now Mistress Peggy – Oh! Excuse me. I mean Mistress Thordwall – You’ve been dealing in some pretty odiferous nastiness. That’ll out itself in time even if your friend Tancred de Bastard’s gone soft on you.”

“You forget yourself, Slythe,” she said. “As an owner, I am a league governor. As in … one of your employers. I know you have no proof of any ill conduct, for there was none! I expect you to treat with me respectfully.”

He gave a knowing smile that revealed the golden false tooth he wore, no doubt trying to impress the dockside dandies of either sex, or neither, for that matter. He twisted an end of his curling moustache in his fingers. “Ah, but Eguardo Giamucci is a governor too.”

“Nothing escapes you, does it Slythe?” She pointed at Queen Beatriz’ flagship at anchor in the harbour. “Giamucci might have ships, but he doesn’t have ships like that, does he? See that? It and ten more warships like it standing off-shore suggest the Board of Governors will keep him off my back. And you too. Don’t think I haven’t noticed your role in the plots to sink us. You stay off my back or you might find yourself looking for more than a new job.”

“And stay away from my coach.”

“Now that you mention my old friend Karsgaard, I have a few questions to ask him about his conduct.”

“No you don’t. You stay clear of him or you’ll have me to answer to. Me and my friend’s ships!”

He had the good judgement to nod and bow. “Well, coming from Pillaging Peggy, I had best get back to planning security for the Jesters. I imagine they are following you over from Halos and shall soon arrive. Word is Nytmir Curseweaver’s all angry because her sister beat her last game out.”

“You do that. Just stay clear of the Militantes.”

The Hierarchs rule their archipelago competently but no one confuses them for royalty, not even the Hierarchs themselves. Thus, when summoned into the presence of a Queen, they came, however annoyed they might have felt. They did make a show of boarding their yacht at the Navy Docks and then sailing around the island to where Queen Beatriz had ordered her flagship anchored.

Thordwall was present when the Hierarchs embarked. Queen Beatriz had set aside her breeks and leathers, donning all her flounce and girdles. She also wore her crown and sat upon a throne that had been set up on deck for her. The Hierarchs paid their obeisance to the monarch and heard her out when she noted her willingness to support the Militantes with all the power of her state. The matter of threatening to break the Pact went left unsaid but everyone heard the unspoken threat.

Guayamartí had two teams, the Wharf Rats and the Imperials, and the association between them and the Hierarchs remained nebulous. The Hierarchs nevertheless undertook to ensure that no team had any grounds for complaint about the conduct of state officials, such as procurators and inquestors, or about the neutrality of the league’s governing body. Indeed, Thordwall had learned enough about the city to know that many of these rulers bowing down to the Queen thought little of the upstart spice merchant, Eguardo Giamucci. Guayamartí’s Monte Alto, where many of these people lived, famously supported the Imperials; the Wharf Rats drew most of their support from the Barrio and other ghastly neighbourhoods.

All investigations into the ownership group behind the Mytilan Militantes were dropped.

The scene was now set for the last round of games of the regular season. Of the league’s eight teams, two had qualified for the post-season, and two had been eliminated. The other four had a chance of locking up the last two play-off spots. Thordwall’s negotiations with Duc Tancred de Baston gave her confidence that her Militantes would win their last game against the Imperials, which would take the team above the Duskdaggers, but she had no control over the Skitteringi or the Mongrels.

Ian H. McKinley
Jacyntha planted her fists on her hips, trying to project the image of a determined footy player. Such pretences…