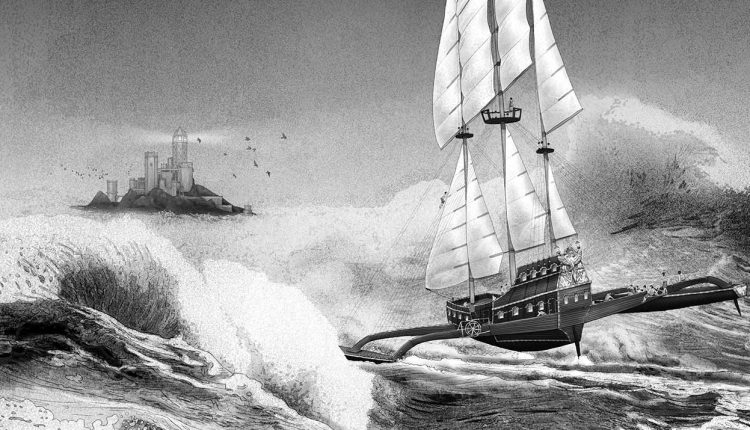 Jacyntha, captain of the Mytilan Militantes, leads her team into a do-or-die game against the  Mongrels. Although the Xonyxas suffer a setback by conceding an early touchdown, Jacyntha knocks an Orc blocker out of the game. She feels imperious. Prior to the ensuing kick-off, she reminds her sisters they still have time before the end of the half to equalize and she underscores the importance of sticking to the game plan. Jacyntha does her part, drawing two Orc strikers out of the Mongrel line, evading them, and then throwing a long touchdown pass to Ellpay on the stroke of halftime.

Coach Karsgaard Neuvil’s half-time team talk outlines how he wants the Xonyxas to execute their innovative up-and-under kicking tactic. He gives out individual assignments and then asks who amongst his players knows why he hasn’t mentioned “belief.” Jacyntha knows: she says, “We don’t need belief. We have certainty.” She leads the Militantes to a 3-1 win that puts them back into the hunt for a play-off spot.

Duc Tancred de Baston blustered on. “I doth concede my abduction and ransom are meet given the nature of the campaign we were waging against each other and my personal defeat.”

He certainly hadn’t thought his abduction was fair play in the aftermath of its occurrence. He’d squealed like a stuck pig for days and only shut up when delivered into the custody of Queen Beatriz. Her Majesty had then pampered the owner of the Guayamartí Imperials, taking good care of the uncle by marriage to the Pretender to the Chivalron throne. The duke’s mood had improved with every goblet of wine and succulent supper served to him, to the point he could now admit to his part in the scheme to lure Thordwall to her destruction.

“A most legitimate bounty hath been placed upon her head by the Hierarchs, I wouldst note.” A sudden queasiness hit him as the Queen’s flagship emerged from the lee of Capra Island and the rollers coming off the Sommer Sea struck the elegant trimaran. The ship’s banks of sails, its speed, and the swell of the rollers lifted the vessel clear out of the water, and it leaned onto its port outrigger. It cleared a crashing roller before its keel again slid into the receding swell, but the next trough soon had it airborne again. The movement was difficult even on Thordwall, who had plied these waters for years on the Menace, but her pirate ship was a mere caravel whereas this magnificent ship could but kiss the waves from time to time and outrun even a High Elf ship of the line. One last sprint across open water would take them to Guayamartí and its protected harbours, and from the looks of it, the crossing wouldn’t take very long.

The duke, clearly less used to the trimaran’s odd way of moving through water and air, fought against his seasickness and when he had regained control of his stomach, he continued. “Alas, she outflanked us all, Majesty, and more fool I for not having kept my wits about me! Thus the ransom from Carles in return for my liberty is fair and I thank Your Majesty for your hospitality while held prisoner. But to pre-determine the outcome of a match! That, most noble sister, would lack honour! Such a vile deed wouldst place me far beyond the pale of fair play. I wouldst be despicable … and I might say the whole fetid business would further embellish the foul reputation of Jarl Neuvil. A man is judged by those with whom he dost walk. That is a man with whom I shan’t walk.”

Thordwall could hold her tongue no longer. She turned to Queen Beatriz, “Methinks the duke doth squeal too much … he is, after all, happy enough walking with that paragon of virtue, Eguardo Giamucci.”

The Queen, who had set aside any shred of flounce and every drop of scented oils in favour of breeks and leather, stood with her back turned to her guests. She looked through her cabin’s windows to the roiling sea. Now the Queen turned to face them, instinctively bracing her legs for the roller that heaved her flagship high and then let it fall into another deep trough. Thordwall had to admit, she hadn’t expected Mytilan’s monarch to have such stable sea legs. With quick eyes, a proud nose, and a high brow – features Jacyntha had clearly inherited – the Queen was every bit a hands-on ruler. And, like Jacyntha, the woman was substantial … not stocky so much as hardened. Queen Beatriz followed up on Thordwall’s point. “Giamucci … the spice merchant who tried to have Neuvil murdered?”

“Yes, and the architect of the plot to destroy me and undermine our team.”

The Queen turned back to gaze out over the white-capped rollers. She said, “Tancred, Mistress Thordwall’s point is an excellent one. My honour isn’t defined by who I walk with, it’s defined by my actions. Your underhanded scheming says more about you than you might care to pretend. And besides, she isn’t asking you to pre-determine the outcome of a match. She’s simply proposing you protect your team.”

Thordwall jumped in, “This is a throw-away game for you. The Imperials have already qualified for the play-offs. Fielding your full first team merely exposes the players unnecessarily to injury. Keep them in good health for the semi-final.”

The duke puffed out his cheeks and clasped hands around his midriff, but happily he overcame the sudden need to vomit. He took a deep breath and finally said, “Verily that sounds to mine ears like a threat.”

Queen Beatriz interrupted Thordwall with a sharp cutting movement of the hand. “Come now Tancred. Are your players really so resilient? In your country’s civil war, you won many battles, and famously lost a key one to Henri des Ormes.” Thordwall noted the Queen tastefully didn’t call the duke’s enemy by his more common title, Henri the Tenth, King of Chivalria. “When you won, did no one in your army succumb to their wounds? In your defeat, did you not lose many knights, yeomen, and commoners? How many are forever lost to you? Did suffering such casualties not make fielding another army to re-take the throne for Carles impossible?”

The duke bolted to his feet, staggered against the roll and pitch of the ship, and reached a window Beatriz had tactfully left open for him. He retched out the window, bent double, half in, half out. Thordwall even had to clutch onto his tunic when another roller threatened to toss him fully overboard. After they got him seated back down, he wiped his mouth with a kerchief and said, “Wouldst I field some players from mine practice roster, wouldst the Imperials benefit from aught beyond a healthier roster for the semi-final?”

Thordwall stilled her features, preventing a smirk from touching her lips.

Beatriz put on a shocked expression. “The Imperials? Of course not. Do not insult me by insinuating you wish a further inducement!” Then she bestowed a gracious smile on the duke, a smile Thordwall had seen light up Jacyntha’s face a dozen times. “However, were we to set aside discussion of football for a moment, would you be so kind as to confirm for me the sharpness of my memory? Do I recall that Carles escaped the civil war with just the one ship?”

“As you see, my navy has many. They could, perhaps, carry several thousand of Carles’ supporters back to the shores of your land come spring.”

“Verily,” Queen Beatriz said with a kindly smile. “There is just one other thing we’d have to arrange …”

The duke furrowed his brow. “And what, perchance, might that be?”

Upon hearing the Queen’s next words, the missing piece of an incomplete puzzle in Thordwall’s mind fell into place. Ever since the beginning of spring, she had asked herself a particular question:

Why would Mytilan’s Queen send a messenger to Pillaging Peggy to propose they launch a footy team together?

The voice, unexpectedly interrupting her thoughts, made Jacyntha jump. With all the din coming from the team’s disembarkation from the Menace, Jacyntha hadn’t heard Mistress Thordwall approach. She glanced at her employer, who had come across from the Mytilan flagship on a dinghy once the fleet had rounded the Forteresa Almenara headlands. Now, tied up alongside the wharves of the City Port, the owner of the Militantes came up to the larboard rail and surveyed the docks, including the tattooed figure waiting below.

Jacyntha sighed and replied. “I know. I figured it out … finally.”

Mistress Thordwall said, “Is he here to greet you?”

“That’s why I haven’t disembarked yet.”

“You can’t hide from him forever.”

“I don’t intend to hide from him! I mean to hunt him down … on the pitch.” Then she thought to add, “But do not worry Mistress Thordwall, I will execute Coach Karsgaard’s game plan before going after Pierce Rosethorn.”

“Good. I wouldn’t want you to set an all-time league record for getting stripped a team’s captaincy.”

Jacyntha felt herself flush. “I never apologized to you for my actions in that game against the Quarrels.”

“I liked your leadership even more. Keep it up.”

Jacyntha nodded. “I’ll do my best.”

“I’m sure you will.” The owner turned away but then must have thought the better of it because she turned back. “Why are you here, Jacyntha?”

Well, there was no keeping it secret forever, and especially seeing what had happened in Halos when Mistress Thordwall somehow contrived to mobilize the full force of Mytilan’s navy. “You knew?”

Thordwall shook her head. “At first, no. When Neuvil shared his suspicions with me early on, I subsequently figured it out. I didn’t actually know for certain until three days ago.”

Jacyntha stared down at that arrogant shit that was Pierce Rosethorn, standing there on the wharf with a bouquet of flowers in his hand.

“I left Mytilan to build myself a life,” she said in response to Mistress Thordwall’s question. “A life of my own, away from my mother.”

Thordwall nodded. “Fair enough. But you can’t hide from her forever either. You’re going to have to confront her. Otherwise you might be in for a nasty surprise.”

Jacyntha furrowed her brow but before she could ask what exactly Mistress Thordwall was hinting at, the woman went off to speak to her brother Horatio, the Menace’s captain.

There was nothing for it but to go down the gangplank and endure Pierce Rosethorn and his accursed flowers.

Ian H. McKinley
Ellpay was right. The Mongrel’s striker, Mik Mangenain, who had scooped up the ball after the kick-off, had…