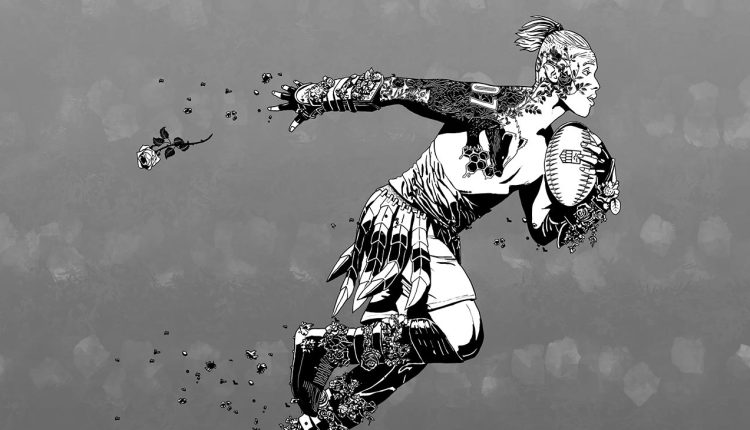 She had seen the Quarrel’s thrower fade right and had known Rosethorn would be the target. She had backed off her sisters in the ruck and had done so just in the nick of time. The Sylvan thrower had threaded a pass right between Belyna’s and Karolyse’s outstretched arms, and guess who had slipped around the line to snatch the pass out of the air and head down the sideline?

With the Sanger roaring in her ears, the spectators sensing the inevitability of the winning score just as the championship game was heading to overtime, Jacyntha willed herself into full flight.

Rosethorn was quicker than her so she needed to get the angle right. Instead of closing him down as she’d normally do, she made for the corner flag. Her teeth flashed white, less a smile than a clenched snarl. In contrast, the bastard Sylvan grinned and dangled the ball on an outstretched arm towards her as he raced down the sideline.

She dug deeper, leaned further forward, and pumped her legs for all they were worth, which was a lot. For all she knew of Rosethorn’s speed, she didn’t think he knew of hers. They flew down the pitch in convergent trajectories, crossing the half-way line at the same instant. The Sylvan, confident in his skill and playing to the crowd, pulled a rose out of somewhere and brandished it to the crowd as he ran.

Anger made her quicker.

There was no one in the backfield to help… the Quarrels had reduced the Mytilan Militantes to eight players and Jacyntha’s teammates were all in the ruck. But she realized that maybe she didn’t need help; pulling out the rose had cost Rosethorn a pace and her anger had given it to her. Indeed, he must have realized his error because he let the rose fall to the ground as he accelerated.

They were still stride for stride as they passed the 20-pace marker. Rosethorn wasn’t grinning anymore. He, too, leaned forward.

Then two things happened at precisely the same time. Jacyntha lunged in a blur of blue and yellow macaw feathers that were her team’s sigil; Pierce Rosethorn skidded and slipped sideways, anticipating the tackle and avoiding it.

The crowd held its breath and as she sailed past the accursed Sylvan, a silence reigned, the intake of breath before the roar, and only the pounding of her heart filled her ears. Rosethorn leaned back as she careened past, the fingertips of her right hand brushing the nose of his honey badger tattoo on his chest.

There was no thought that guided her hand, no tactic practised on the training ground, no weapon that extended her reach, but as she flew towards the sideline she clutched at his belt.

Crime doesn’t pay; until it does.

It’s a lie to say otherwise, though Cassandra Thordwall wasn’t above lying when necessary. Pillaging and piracy had given Thordwall plenty of lucre over the years. And yet, not only had it been dangerous work, it had taken her away from her driving passion: footy.

And so, she had given her share of their caravel to her brother that very morning and had gone ashore in Guayamartí to meet Karsgaard Neuvil, the once-famous, now disgraced footy coach. Umberto accompanied her, given the dangers the filth-lined streets near the wharves presented, not to mention those presented by Neuvil himself. She had confidence in her ability to defend herself – piracy allowed you the opportunity to hone certain skills, after all – but being outnumbered or swarmed was always a possibility. And then there was the matter of the assassins …

As she walked along the Maral Canal in the shade of the palm trees that lined the strand, she spared a glance up at the region’s most important cultural landmark: the Eztadio de Sanger.

“There it is, captain,” Umberto said with enthusiasm, which was curious because he was usually so taciturn. She supposed they had just made port that very morning and he hadn’t been back home in many years. “That’s where Slave’m Beggar’m lifted the Blue Blood Cup.”

“The very place,” she said. “Cemetery of Dreams, some call it, though I call it the Palladium of the Impossible. I prefer to think of all the reason-defying glory it has witnessed.”

“Ha! Got me there.” Then she added, “One thing: we’re not pirates anymore, got it? So drop the ‘captain’ when you speak to me.”

“Let’s go with ‘boss’. That’ll do. We don’t want people connecting me to Pillaging Peggy,” she said, referring to her pirating nom de guerre. “Look, we’re entering respectable society … well … as respectable as this enterprise allows at any rate. We have to keep up appearances.”

She let her silence answer for her.

“And if it’s all so respectable, why we meeting him at the Luffing Lateen?”

She stopped and faced her bodyguard. “There are only so many places that allow him in. Listen, I know the owner of the Lateen and he promised me a private corner in exchange for bringing the team here after the first game. He’s a big fan.” Umberto simply shrugged, his eyes scanning the narrow streets that gave on to the strand.

Telling Umberto that Gosling was a big fan was like telling him rats liked Guayamartí. Hardly a stunner. Footy was huge in this part of the world. Which was one of the reasons Umberto has suggested they come ashore here. Most of the inhabitants of the city would kill (or die) for an entry into the Sanger on high festival days, but they had also petitioned the city Hierarchs, violently and effectively, to proclaim a festival day every fortnight so that they could go to more matches. The prospect of regular game days, and the silver offered in prizes, had brought many a team here from the nearby lands and fostered the creation of a league. It was now an unexceptional thing to see Dwarves or Elves or fouler things roaming the laneways.

Umberto had his reasons for coming ashore in Guayamartí, which probably went beyond football. He was certainly right that the average Guayamarteño was prepared to pay to see good footy. But Thordwall had a more important reason why she had wanted to come here, to this trading city sitting at the end of an archipelago splayed across the Sommer Sea; many of the league’s team owners were merchants whose shipping could suffer from piracy.

As she had guessed, the Lateen had its shutters open given the clement weather, letting in the afternoon light and the sea air. Even if she had wanted a private corner, Thordwall had also wanted lots of light for the meeting. She didn’t want Neuvil pulling a dagger out from some dark place that Umberto couldn’t see. As they entered, Gosling greeted them and took them over to the tavern’s snug. “It’s lovely to see you Mistress Thordwall! Or should I say Manager Thordwall?”

“Mistress will do. Show him over when he arrives. And bring me some wine … and not that rubbish you foist off after midnight, either. A flagon of Pinto Macia would do.”

Gosling bowed his head. “We pronounce it Pintó Macía, with the emphasis at the end, Miss Thordwall, but howsoever you pronounce it, a flagon is on its way.”

Umberto investigated the snug, checking under the bench, behind the cushions on the bench, under the table. He confirmed the scimitar was in place with a nod. Then he took a dagger from his boot and tucked it behind the bench cushion and Cassandra sat next to it, leaning a packet of powder against the wall by her foot. Her bodyguard inspected the door to the snug and jammed it open before taking up a position directly across from the opening.

“Boss, you sure there’ll be no more than two?”

She nodded. “Giamucci hasn’t had the time to hire more,” she said, referring to the owner of one of the two big local footy teams, the Guayamartí Wharf Rats. She smiled at the irony; a wharf rat in her employ had confirmed the man had brought an Assassins’ Guild representative into his home this morning, just as she had hoped he would.

They didn’t have to wait long. Karsgaard Neuvil preceded Gosling, clearly needing no one to guide him. She rose from the bench and looked him over. Neuvil was big, perhaps two full paces tall and nearly as wide. He had a shock of red hair that hung down to his shoulders and bushy eyebrows of ochre. Someone had affectionately broken his nose at some point, re-setting it askew on his rough-hewn face. His eyes, though, burned, which Cassandra thought was a good sign. He walked with a limp, but it clearly didn’t slow him down, for he was on her as quick as a mongoose on a cobra, scooping up her hand before she could react. He lifted it to his lips, though she didn’t actually feel the kiss he planted there.

“Master Neuvil,” she said, calling on every ounce of brassy confidence she’d ever mustered in her career in piracy. “Good of you to come.”

He smiled and replied, “I am honoured to make your acquaintance.”

“I didn’t know you were so well-spoken,” she said.

He nodded. “Is that how you pronounce it?”

She graced him with a sweet smile. “So I’m told.” Gosling poured them goblets and left them a bowl of coconut shavings.

She shook her head. “That’s Umberto de la Calle and he’s your Thane of Player Personnel … if this chat goes well.”

“What else is there? And why else would anyone want to share a flagon of Pintó Macía with Karsgaard Neuvil?”

“There are a few people who would pay greatly for my company these days.” It was a wry statement, devoid of humour and bluster.

“I thought you’d been cleared of the match-fixing accusations.”

“By the Hierarchs, aye, but not by some others. So, what do you want?”

“Two things. I want a team and I want a truthful answer from my new head coach.”

His bushy red eyebrows shot upwards and he frowned. “Teams are costly. We are not talking silver, either. We are talking gold.”

Umberto tossed her the pouch she had prepared back on the caravel. She snatched it out of the air. Weighed it in her hand and let it drop to the table with a thump.

“What is your question?”

She leaned forward. “Are you clean?”

Ian H. McKinley
“Xonyx the Strong rose to become a fine general and an inspiring leader. She outwitted her enemies and provided…